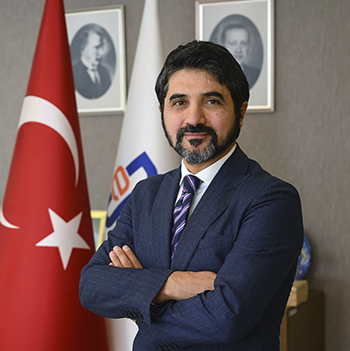 He graduated from Boğaziçi University, Department of Political Science and International Relations in 1997 and took master’s degree from the University of Leeds on International Economics and Politics in 1998.

Starting his career as an Assistant Auditor in the Board of Auditors of Türkiye İş Bankası A.Ş. as of 1999, Mucahit OZDEMIR worked there as an Auditor till 2007. Following this position, he worked in General Directorate/Credit and Finance departments until June 2011.

He was appointed as TP Deputy General Manager in 2016. After working as the Acting General Manager of TPIC as of June 2018, he started to work as the Deputy Minister’s Consultant in the Ministry of Energy and Natural Resources. During his tenure at the Ministry, he performed many national and international procurement activities.

He was commissioned as the Acting General Director and Chairman of the Board of Directorate General of State Supply Office as of February 12, 2019, and with the Presidential Decision dated August 18, 2022 and numbered 2022/418, he was appointed to these duties which he still carries out.

He has a good command of French and German as well as English. He is married with 3 children.